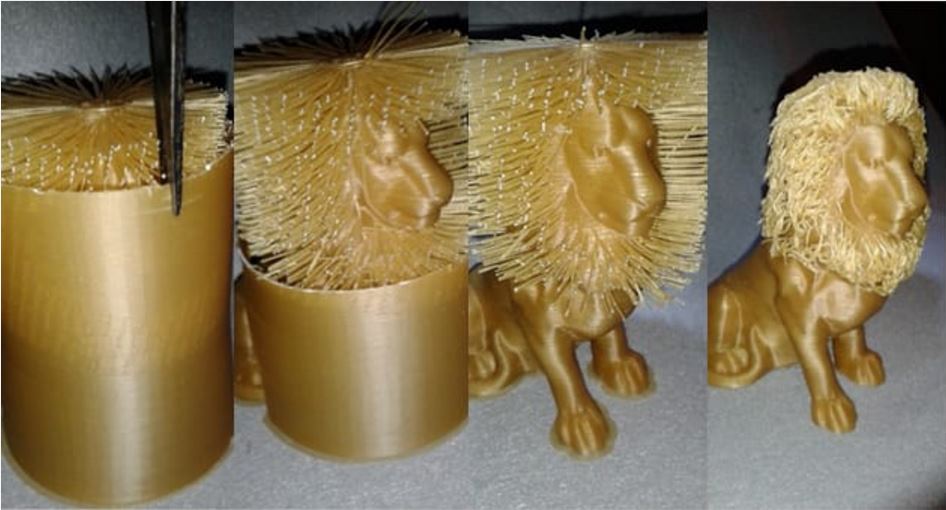 While searching for some new models to post I came across a fascinating model that had made the featured first page of 3D prints on Thingiverse.com. The Model, Hairy Lion, was shared by Primoz Cepin from Ljubljana, the capital of Slovenia.

The Model featured some very creative techniques to recreate the hair on the lion’s mane. Using a sacrificial wall surrounding the model of the lions head and putting strands of bridging filament attached from the lion head to the wall. Once the printed model is complete, the wall is carefully removed and then it is time for you to put your styling skills to work on the hair with the help of a heat gun or some other heat source.

While it may sound like an unusual technique, I found it even more interesting in how this process evolved over time from a small series of other shared models on Thingiverse.

According to Primoz, he did a remix of the Lion design from geoffro of hex3d.com on Thingiverse. The Thingiverse model named Lion HD was also a remix from another designer named 3DWP entitled Lion.

As for the hair technique used on the mane, Primoz said he created his first “hairy” 3d print when he created “Cousin It” from the Adams Family. I would like to note here that this is friggin sweet! Who didn’t love Cousin It?

From here, Primoz says he took inspiration to do the hair on “Cousin It” from “Furry Vase”, a model shared by Daniel Noree of Barspin Sweden. This model was also shared on Thingiverse.

According to Daniel Noree his furry vase creation was inspired by the “Drooloop” idea by Mark Peeters of Kalamazoo Michigan. Mark had shared the drooloop technique on a model called “Super Flowers”. This involved printing filament strands in mid-air.

So following this timeline one can see how sharing can inspire others while expanding our techniques and creativity across many generations of models over time.

Without creative commons and open source think how much less advanced the desktop 3D printing industry would be now.

My hat goes off to everyone who posts their models and techniques to share with the rest of us. Without you, there would be far fewer sources for inspiration in this world.

Copyright © 2022 • Making It 3D • MakingIt3D.com is a participant in the Amazon Services LLC Associates Program, an affiliate advertising program designed to provide a means for sitesto earn advertising fees by advertising and linking to Amazon.com.