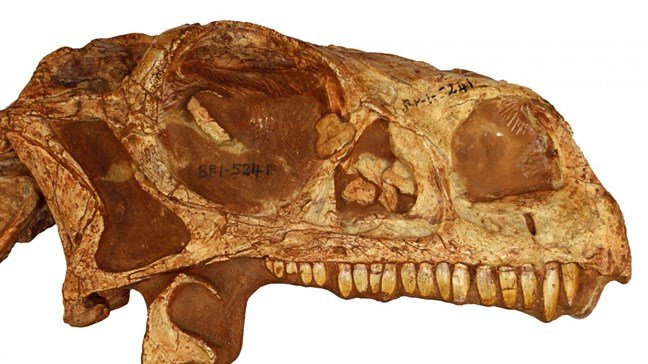 For those interested, you can now 3d print a dinosaur skull from a full recreation of a 200 million-year-old dinosaur, thanks to PhD student Kimberly Chapell, from the University of the Witwatersrand in Johannesburg, South Africa.

The dinosaur, known as Massospondylus carinatus, lived in the Early Jurassic. Found in the upper Elliot to lower Clarens Formations of South Africa and Lesotho. One of the first dinosaurs ever described in the importance of South African Paleontology for the study of dinosaur evolution.

Until now, research has been restricted on M. carinatus due to a lack of detailed internal cranial descriptions.  Thus the current research aimed to produce a 3D representation of the braincase and skull of M. carinatus.  Allowing researchers to describe the cranial anatomy and internal structures and in turn, making it possible for them to establish possible cranial autapomorphies of M. carinatus.

Massospondylus was a mid-size sauropodomorph, around 4 meters (13 ft) in length,  weighing approximately 1,000 kilograms (2200 lb). Researchers have long debated its diet and lifestyle, though recent studies strongly suggest that it was herbivorous or omnivorous, not carnivorous. Interestingly, scientists have also found fossils where these dinosaurs had rocks inside their stomachs. This was interpreted as a gastric mill, to aid ingestion of plant material, compensating for its inability to chew – as is common with several modern birds.

Thanks to Kimberly Chapelle, the 3d scan is available for free download. So anyone wanting to 3D print their own dinosaur skull can do so.