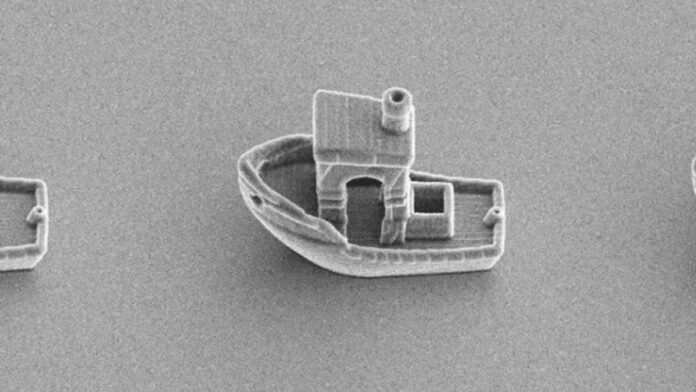 Everyone knows Benchy the tug boat. One of the most popular 3D prints on thingiverse, created to use for torture testing your 3D printer. It now appears as though Benchy has become even more famous, researchers at Leiden University have 3D printed the little tug boat, and when I say little, I mean tiny! This boat was printed so small it can sail down the interior of a human hair. We are talking 30 micrometers! Very creative use of Benchy.

Researchers at Leiden University have 3D printed the smallest boat in the world: a 30-micrometer copy of Benchy the tug boat, a well-known 3D printer test object. This boat is so small, it could float down the interior of a human hair.

The 3D-printed boat is part of an exploration of microswimmers, microscopic organisms or objects that can move through liquids. Natural examples of microswimmers are bacteria and sperm. This tiny Benchy propels itself using a bit of platinum that reacts with hydrogen peroxide.

The most interesting thing is how they were able to print the little boat’s cockpit, an open space that requires lots of geometric trickery to build.

There was a little more tach involved than your standard 3D printer. Focusing a laser inside  a droplet in a controlled motion, to create the shape they want.

“A laser is focused inside a droplet that locally hardens in the focal spot of the laser,” said researcher Daniela Kraft. “By moving the laser through the droplet in a controlled way, we can write the swimmer shape that we want.”