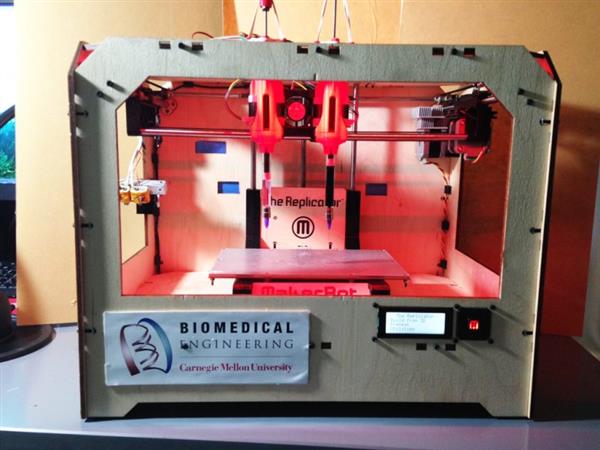 Believe it or not researchers are using a hacked Makerbot replicator to 3d print (or 3D bioprint) soft structures for breast cancer research.

Researchers at the University of Pittsburgh Cancer Institute (UCPI) along with engineers at Carnegie Mellon University (CMU) have teamed up to study the over diagnoses and over treatment of non-invasive precancerous breast tumors by utilizing a hacked Makerbot Replicator to create the first ever 3D bioprinted breast ductal structure to identify markers for low risk pre-malignant disease. The consumer grade 3D printer will be outfitted with a custom designed extruder to print soft tissue within a dissolvable gel. This will help overcome one of the biggest hurdles to printing breast ducts according to Adam Feinberg, materials science and biomedical engineering professor at CMU.

The first step is to create a realistic model system with complete control in order to uncover biomarkers. Up until now the only way to study breast tumors in the lab are to culture tumor cells in a petri dish or grow tumor cells in rodents. Neither method allows researchers a way to trace how breast duct structure impacts tumor spread.

Problems in the past with 3D printed breast ducts, according to Feinburg, is that the printed tissue collapses under its own weight.

“The challenge with these materials is that they’re super soft,” Feinberg said. “They collapse under their own weight. They’re kind of like Jell-O. A block of Jell-O would sit there just fine, like a cube. But once you try to make an intricate 3D structure, it would just fall apart.”

To fix this problem Feingburg’s group invented a way to print soft tissue within a dissolvable gel using a setup that includes a consumer grade desktop 3d printer. A Makerbot replicator normally extrudes layers of plastic to build up an object. But Feinburg created a custom extruder designed to extrude proteins layer by layer along with other molecules normally found in tissue.

Even better, the plans for this extruder were made available to anyone by opensource download through the National Institutes of Health website.

There is an infinite number of awesome things that can be created with this extruder design. Making it available to anyone interested in printing tissue should open up a route to advancing biomedical research.

Beyond creating better ways of diagnosing invasive DCIS, this new process of 3D bioprinting will help transform how future research is doen by allowing researchers and scientists the ability to create complex biology for study.

Up until now the process of printing tissue has been more than challenging and making the use of a consumer grade 3D printer fitted with an easy to replicate open source extruder seems so simple but at the same time ingenious and will hopefully prove to inspire other researchers to think outside the box and come up with radical new ways to advance science and medicine.