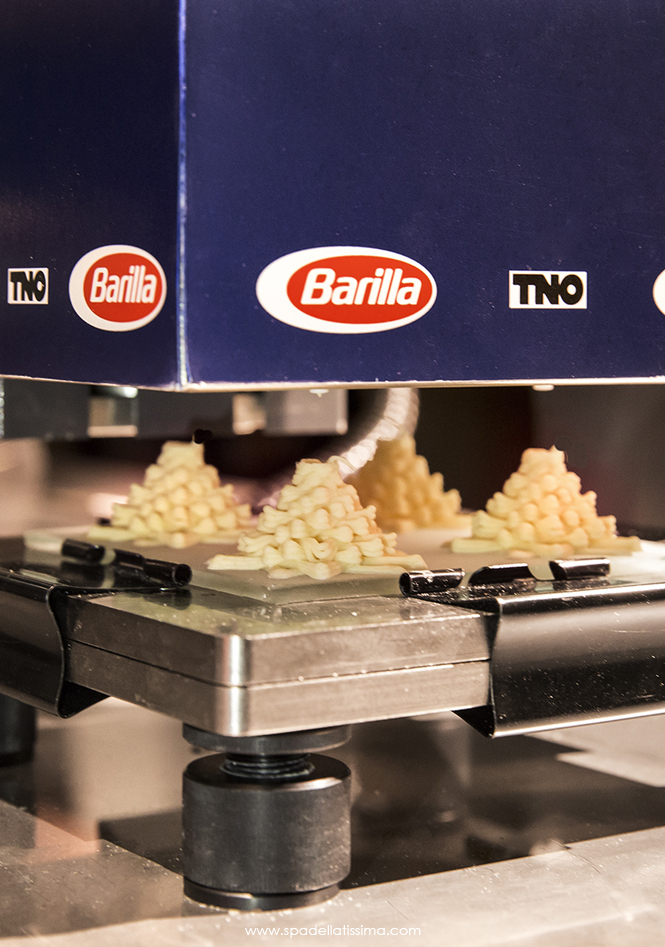 We have heard a little chatter here and there about some of the possibilities of 3d printed food for awhile now, but when it comes to the real thing, one company, Barilla is making great strides towards making it a reality.

When you think about 3D printed food, it is only natural to think of one food in particular that has a large selection of sizes and shapes, some very intricate, and limits itself only to the imagination. Pasta!

One company that does Pasta well and has been working on research and development towards a 3D printer for pasta is Barilla.

Barilla first introduced 3d printed pasta to the general public back in 2014.

In 2014, Barilla launched an international design contest, PrintEat, through the Italy-based 3D printing crowd sourcing online platform Thingarage, where the company was looking for pasta piece designs. Three pasta designs won the competition: ‘Moon’ (pasta in the shape of a full moon with ‘crater’ holes), ‘Rose’ (shaped like the flower) and ‘Vortipa’ (an elegant, sculptural pasta cone) – all of which can only be made with Barilla’s 3D technology.
All these shapes have a specific uniqueness in terms of texture experience or functionality and are not possible with the traditional pasta-making technologies. For example, you can fill the ‘Moon’ shape to make a spherical, filled pasta, or experience a new pasta texture with “Vortipa” thanks to the complexity of its geometry,” Cassotta tells just-food.

Although it may be some time before we see a 3D pasta printer on the market, Barilla has been making great strides toward that goal since they began their pioneer journey five years ago. In collaboration with Netherlands Organisation for Applied Scientific Research (TNO) they now have a working prototype, showing it off at Cibus, International Food Exhibition, back in May of this year.
According to Barilla, they are working on getting it to print faster, but they have made great strides in bringing the speed up since the beginning.

Today, the prototype can print four pieces of pasta in just under five minutes and a plate of fresh pasta can be printed in about 20-30 minutes, the company tells just-food. “When the project was first launched, the time needed to make the pasta was much longer – it was 20 minutes to print one piece of pasta and today we can print four pieces in about two minutes,” Fabrizio Cassotta, R&D research manager for meal solutions at Barilla, says. “We are now working to improve the time to print; our target is to print one full plate of pasta in two minutes.”

The goal is to give consumers the option of designing their own pasta shapes on the computer and also decide what ingredients go into the pasta. Some of the options could be gluten-free pasta, wholegrain pasta, and also possibly a mix of vegetables and pulses.
Ultimately it will still be some time before we see anything on the market. The project is still in the early stages of 3D printed food technology. As Luca Di Leo, Barilla’s head of global media relations, confirms this is a medium to long term project.